Past Issues of the LEFTWICH HERITAGE will be attached here asap.

She graduated from Worcester State College in 1985 with a BS in Natural Science and a minor in Music.  She is currently employed as a production planner at Web Industries in Hartford, CT.

Ellis serves as National Chairman of the Continental Line, an American Revolution reenacting organization. She enjoys spending time with her husband Card and her daughter Sara, playing with her two amazing grandsons, sleeping late, history, reading, and listening to music.

Morgan David Howard
Past President, LHA
We received sad news this week regarding David Howard’s passing. We had such a wonderful time with him at the recent Leftwich Historical Association Reunion in Yorktown, Virginia. We were so thankful he was able to come to Yorktown and participate in welcoming everyone to the events. He always made sure everyone introduced themselves, told us where they came from, and a little about themselves.
David was active in a number of Heritage groups. Our group was very fortunate to benefit from his guidance, hard work, and dedication for so many years.  As Howard Thurmon said, he was “a loyal servant of the LHA for many years.”  He was a good friend to so many of us.
David passed away on October 23, 2018 in Lynchburg, Virginia after an extended illness.  He served in the Air Force as a medic, and was an educator at Central Virginia Training Center, Lynchburg City Schools and Nelson County Schools as a teacher of special needs students.
David’s wife, Becky was an invaluable asset to him and to the LHA, working beside him for long hours to make everything a success at many LHA Reunions and other events.
Several LHA members have expressed a desire to make a contribution to The Leftwich Historical Association in his honor.  LHA will keep all donations in a separate memorial account until we make a decision about an appropriate form of memorial. If you wish to make a contribution, a separate account has been set up, you can go to http://leftwich.org/?product=dave-howard-memorial-contribution and make a contribution.

Please keep David’s family in your thoughts and prayers at this difficult time.
Nancy Jay
LHA Board

On Saturday, November 29, 2014. Members of the Cunningham family installed a grave marker memorializing the Civil War service of First Lieutenant Littleberry Leftwich, CSA.  Thanks to Vann Cunningham for organizing the event. 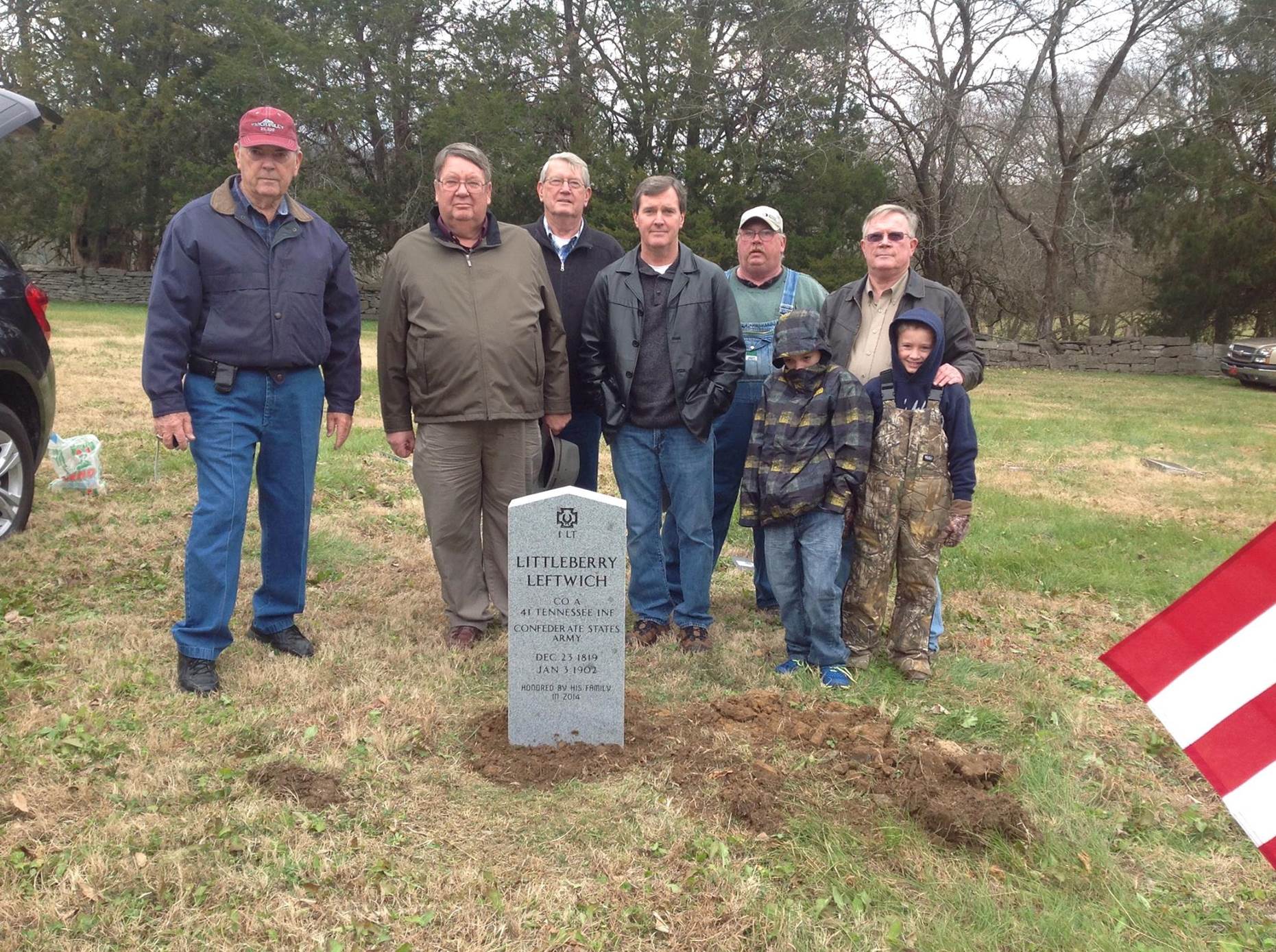 Littleberry Leftwich (1819-1902), born in Virginia only son of John Hopkins and Jane Stevens Gill Leftwich, inherited the Leftwich home at Charity, Moore County, Tennessee.  He was a planter, owned slaves and maintained a typical home of the Old South.  He enrolled as First Lieutenant in Co. A 41st Tennessee Infantry Regiment on 4 Nov 1861 at Camp Trousdale, Tennessee. 1st Lt. Leftwich was taken prisoner at the Battle of Fort Donelson on Feb. 16, 1862 and temporarily interned at Camp Chase, Ohio before being transferred to the officer’s POW camp at Johnson’s Island, Sandusky Ohio on April 26, 1862.   Records indicate he was shipped out of Johnson’s Island, probably on September 1, 1862; possibly through Aiken’s Landing, Virginia and was reported as being among 1,104 prisoners of war on board Steamer Jno. H. Done, near Vicksburg, Mississippi where he was released, Sept 20. 1862.  He was declared officially exchanged at Aiken’s Landing 10 Nov 1862. He rejoined his reorganized unit and served throughout the remainder of the War Between the States, being paroled 1 May 1865 upon surrender of the army at Greensboro North Carolina.

Following his release from the Union POW Camp, 1st Lt. Leftwich served as an officer in most of the major battles in the Western Theater, most notably at Chickamauga where the 41st played a significant role in breaking the Union line at Brotherton Farm. His unit was one of a handful that held the line at Missionary Ridge protecting the Bragg’s retreat. After the fall of Chattanooga in 1863 till the end of the war in 1865, the 41st as a part of the consolidated unit fought in every major battle in the Atlanta, Middle Tennessee, and Carolina Campaigns.

After the war, he returned home where he was highly active in business and community affairs. On Saturday, April 13, 1872, elections were held to establish the county of Moore. The organizing commissioners then appointed Littleberrv Leftwich and four other men to divide the county into civil districts. Subsequently, in the first election after the organization of the county, he was elected to the office of magistrate for the Charity civil district, a position he held for many years.  He was a farmer and merchant most of his lifetime. In 1885, he joined his son, Charles W., in operating a successful merchandising business at Talley in Marshall Co., Tenn.

Church and home also played an important part in his life. An account by a granddaughter states that “when a fanatic burned the old church which his father had erected, he replaced it with a frame building, which still stands and continues to be known as Charity Church.  He was always the chief strength and support of this church.”  He died at the home of his daughter, Louisa Jane Leftwich Prosser, and her husband, Mark, on Union Hollow Road in Lincoln County in 1902.  He is buried at the Charity Cemetery where his father, his children and many of his grandchildren rest in the old family cemetery in this church yard.  According to his granddaughter, “He loved flowers and vegetables, taking great pride in having the rarest plants in the most beautiful garden in the community.  He was gentle and good, and loved the higher and better things of life.”

It is a privilege to gather on this 29th day of November, 2014 to honor his service, his life and his memory by installing this marker.

Longtime LHA member Sandra Shell has made the news with her popular cookbook.  See the details at http://blog.al.com/press-releases/2014/09/sandys_dandies_southern_cookbo_1.html

The cookbook includes 500 recipes in a soft-cover book covering 144 pages that includes a comprehensive index.

Anyone interested in purchasing a copy of “Sandy’s Dandies” can send a check for $18 ($15 plus shipping) to:

The University of Manchester report from their Survey of Old Leftwich Hall is now available in the Members-only section.

Members of the LHA recently purchased the original canvas Robert Leftwich painting of Old Leftwich Hall that he painted in the 1880s, and are in the process of donating it for preservation.  Professional reproductions from scans are available (at cost – no profit to the LHA) – see the Bookstore link for information.

Message from Leftwich-land concerning the Parish Church for Leftwich (which our ancestors attended). See http://davenhamparish.net/

I have attached a picture of the church I took during the LHA tour of Leftwich historical sites in 2000.

Hi Mike. Found this on the St.Wilfreds, Davenham Church web
page. So, they have an incumbent at last ! As its the Parish church
for Leftwich and planning for the next tour over here is in hand I
thought I had better let you know so that you could forward it to the
movers and shakers of the Association. More to see on the web page,
Best wishes. Derek.
—

A new incumbent has been selected for St. Wilfrid’s,

I have pleasure in confirming the appointment of our new Incumbent, the Reverend Robert George Iveson. His induction will be on Monday 8th September at 7:30pm in Church.

There are many interpretations of the meanings of symbols on arms and shields. This is an attempt to decipher the meaning of the design of the Leftwich shield. The most commonly accepted meanings are given, but be aware that scholars question the reliability of placing historic significance on the designs of arms and crests.[1]

The arms of Richard de Winnington, who became the first Leftwich, were adapted from his father’s arms with the addition of the “cross pateé gules” which Richard used for difference.[2]

The Winnington Blazon of Arms (a written description in Heraldic terms):Argent, an inescutchion Sable, within an orle of martlets of the second.[3]

Argent (Silver) field (surface of the shield). Peace and sincerity.

Inescutchion. Small shield in center of pri­mary shield (an escutchion is the outer shield). Claim of a prince to sovereignty; or marriage to an heiress of the family.

Orle is a border that does not touch the edges of the shield.[4]

Martlets (mythical footless swallows who loved flight so much they never landed, therefore they didn’t need legs) are thought to represent the swift. Since the swift never lands this symbol has been used as a sign of a younger son who has no land of his own, therefore no place to rest. It may signify one who has to subsist by virtue and merit, not inheritance. It is also thought that this is an emblem of one who has been on a pilgrimage to the Holy Land.[5]

Of the second refers to the second color in the description (sable) to avoid repetition.

The shape of the escutchion was determined by time period and geographic region, and was not part of the official blazon.