The village of Leftwich is near the geographic center of Cheshire, a Palatine County, which means the Shire was independently governed by Earls until the union of England and Wales in 1536.  Leftwich covers an area of approximately one mile square, bounded by Northwich to the north, Davenham to the south, and Rivers Weaver and Dane to the west and east respectively. 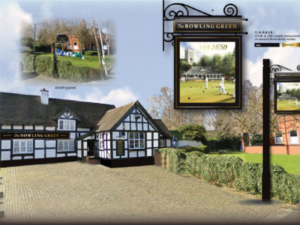 situated on London Road near the Victorian railway arches.

This timber-framed “black and white” building was  originally erected about 1650, and was known to the later Leftwich family.

From the Bowling Green Inn, the London Road runs southward over Brockhurst Hill to Leftwich Green, adjacent to the where Leftwich Hall stood, and where the small post office retains a Leftwich hand stamp as a postmark for mail. 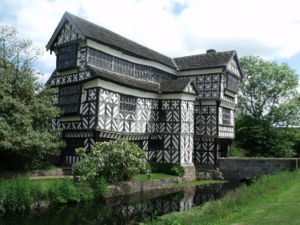 This hall, with it’s beautiful timbers, very close resembles Old Leftwich Hall, both of the same time and area.

St. Wilfred’s possibly stands on its present site from the eighth century, according to the 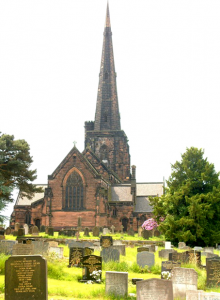 past Vicar, Reverend Christopher Rees, during our visit.  The Vernons and Leftwich’s were attendees, and some are buried there.

Marker on the Leftwich Memorial at the site of Leftwich Hall